Shoes are things you wear on your feet to stop them from getting hurt.

In many Middle Eastern and East Asian cultures it is customary to remove ones' shoes before or just after entering a house, a practice that is also followed in many Western households. Removing one's shoes has an advantage in that not as much dirt is tracked into the home.

Other ways of preventing dirt being brought inside a home on people's shoes include doormats or shoe brushes by the door or a mudroom or entranceway that provides a place to wipe off or clean-up before going on into the rest of the house.

Shoes have many symbolic uses. The type of shoe can symbolize the activity, profession or class of the wearer. Shoes used to be given at weddings as a symbol of the transfer of the woman from her father's care to her husband's. Many styles were originally designed by powerful people in an attempt to hide physical deformities, but then copied by others. The type and color of shoe that someone could wear has been legally regulated at times (for instance only nobles or royalty could wear certain colors). Food binding, platformed and high healed shoes have been both symbols of wealth, but also limiting and making the wearer, usually a woman, dependent on others to even walk. The throwing of shoes at someone can be one of the greatest insults in some cultures. Even showing someone else the sole of one's foot by accident is an insulting act in some cultures. The wooden clog has come to be a symbol of Holland. 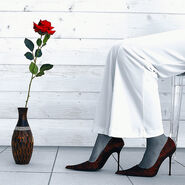 Add a photo to this gallery

Retrieved from "https://home.fandom.com/wiki/Shoes?oldid=6402"
Community content is available under CC-BY-SA unless otherwise noted.