Many houses and apartments have basements, particularly in northern areas of the United States and Canada. Basements are generally underground and support the building.

A basement differs from a crawl space in that basements generally have a higher ceiling height, are more likely to have a concrete floor (as opposed to a dirt crawl space floor), and are accessible from both the inside and outside of the home. In general the ceiling of a basement is high enough for people to stand. A crawl space is typically accessible from the outside of the home only, it may be only a few feet high, and it is not meant for living space or storage the way a basement is. Crawl spaces are often vented, whereas basements are not. A cellar differs from a basement in that it usually does not have as large a "footprint" or take up as much horizontal space. A cellar tends to be used for food or cool storage, but not for a living space as an "improved" basement can. 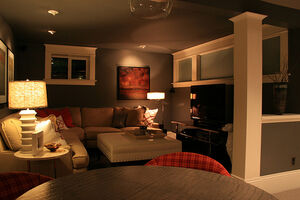 Basement walls are built from

Basements also provide access that can make some infrastructure easier to work on or improve. Usually basements increase the value of a house, even when they are unfinished.

Basements or cellars (as they are more commonly referred to in Europe) provide protection from some natural threats, such as tornadoes. With less glass, a lower profile and earth reinforcing the walls, in most homes, the basement is the safest place to be during a tornado warning or when there are high winds. (This may be counterbalanced if there is also flooding.)

Some of the problems that some basements have are dampness or flooding, which can lead to potential mold and water damage issues.

While most people welcome the additional space, it is more area to care for, clean, and can necessitate expensive repairs should a foundation issue arise (which is common).

In many buildings, some spaces, like attics, basements, or garages, are not considered living spaces. The raw or "unfinished" construction materials are not covered up. So, for instance in the basement, the floors and walls may be poured concrete, concrete blocks, or stone. The ceilings have exposed beams, joists, insulation, ducts, pipes and wiring. These spaces can be "finished", adding to the living space.

In some cases, it's more than just a room or two, it can be entire apartments. Regulations and standards vary, but some municipalities will not allow you to consider this as part of the square footage of the house unless it meets certain requirements, such as a door to the outside. However, in advertisements you can still note that the basement is finished, and you'll be able to enjoy the amenities while you live there.

Finishing a basement has the advantage of adding an entire floor of usable living space to a home with no loss of yard space.

All walls have already been built, and the space has access to pipes, wires, windows, and other things that would otherwise need to be installed as part of the construction.

Insulating basement walls as part of the finishing will also make the home more energy efficient and reduce utility bills. Basement remodeling will recoup approximately 70% of the cost of the investment in the home's resale value.

A "daylight" or "walkout" basement is usually one in a house that is built on a slope. One or more sides of the basement have access directly to the outside without going through the upper floors. A special, sunken stairway can also provide access. This direct access to the outside has the advantage of providing daylight and emergency exits. It has the disadvantages of being one more place where the home needs to be secured, and if badly built, a way that water can get in.

The primary disadvantage to finishing a basement is that these are notoriously damp, humid spaces, where mold can grow and thrive. By sealing the concrete with plastic or a concrete sealer, and waterproofing the basement, this problem can be avoided.

In some parts of the world basements are less common because of problems with a relatively high underground water table or flooding.

Interesting basements (may include commercial sites):

Retrieved from "https://home.fandom.com/wiki/Basement?oldid=10437"
Community content is available under CC-BY-SA unless otherwise noted.